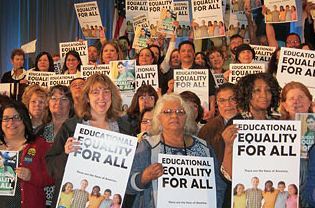 Several of us attended a CCA conference recently and learned some important information about our salaries, budget and ACCJC that is relevant to bargaining.

The first document is a statewide comparison of personnel costs. You can see how much MPC spends on Academic Salaries, Classified Salaries, Benefits, and Total Personnel Costs compared to statewide averages. This information indicates the following:

MPC spends significantly less on Personnel–both salaries and benefits–than other colleges. The data are taken from official budgets and show MPC spends 81.24% on personnel while the state average is 85.87%. When someone says we spend a lot on personnel or that faculty salaries or benefits are making the budget unsustainable, you can use this data as evidence to prove those statements false. In fact, our overall personnel costs are low–which means we are spending more on other types of overhead and less on people. Academic Salaries includes both Faculty and Administration, but even so our Academic Salaries are below state average at 38% of budget compared to 42% state average.

The salary data is presented in three ways: average salary at various points of salary schedule alphabetically arranged, arranged highest to lowest, and a bar chart. The major take away here is that MPC salaries remain in the bottom of the state and that our salaries get worse over time. This data is for FT only–we were not able to get PT comparisons at this time.

Part of the reason for our salary getting worse over time is our Salary Schedule includes 10 years where you do not get a salary step adjustment. So from year 13 to 18 your salary is stagnant, but at most colleges faculty salaries advance. This results in a loss of earning power during those ten years. Highest earnable salary at 66 out of 72, which put us in the bottom 10%, means that your retirement benefit will be in the bottom 10% because STRS calculates your retirement benefit based on your three highest years’ salary. You get a % of that highest salary based on a percentage multiplier (2%) and number of years worked. Let’s say you work 30 years and have a Ph.D. and your top salary is 98,921. Your annual benefit would be 60% of 98,921, or 59,352. Contrast that with Gavilan, where highest earnable salary is 117,117 and the annual retirement benefit would be 70,270. Not only does the Gavilan faculty member make more every year they work there, but they also make 10,918 more every year of retirement.

One of the things we hear from people was that compressing the salary formula from 27 to 17 years was important because every year you don’t advance on the salary schedule you fall farther behind peers at other colleges and given that raises are so hard to attain at MPC, without steps you lose buying power every year relative to cost-of-living. People who do not work here 27 years do not get to the highest earnable salary and that negatively impacts their retirement for the rest of their life.

We should be seeking both salary compression as well as increasing the highest earnable salary.

Another concern for PT faculty is that they have no job security. To respond to this, the state passed a law requiring districts to negotiate PT seniority, or right of first refusal for assigning courses based on seniority.

We had agreed to language that gave some seniority rights for PT but we were seeking the ability to offer two year contracts for greater security in cases where instructional need is clear and where the PT instructor has been evaluated. The district had agreed to the former but not to the latter.

Finally, we had agreed in principle to include language about SLO assessment in faculty evaluations, but recently ACCJC lost a court case that found ACCJC was interjecting itself into bargaining matters, specifically regarding SLO and faculty evaluations, as well as dictating to districts how to address budget deficits. The court case found that ACCJC had acted unlawfully in a number of ways. This case changes the negotiating and credentialing landscape and means we do not have to accept SLO assessment as part of faculty evaluations in order to meet accreditation.

We will be reaching out to the faculty in the coming weeks to begin to craft our position as we enter the first step of Impasse process, which is state mediation. The state will send a mediator to help the sides agree, if possible. This type of mediation is the only way we could get District to respect our salary formula and resulted in the 1% raise in 2013 and a compromise on the 4.39% the district owed in 2015 that we accepted in part as a 1% in 2016 and 2% in 2017. The district acts as if this is a raise this year but in reality they are paying us less than they owed us and should have begun paying us in 2015. In any case, we will be speaking with faculty to craft our bargaining position going into mediation. We are not bound by what we have offered or agreed to in previous negotiation sessions–nor is the District.

Thank you, and if you have questions please contact Lauren, Blake or me or your Division Rep.

Back To Top
Skip to toolbar